LinkNYC programme gets a reboot with 5G kiosks 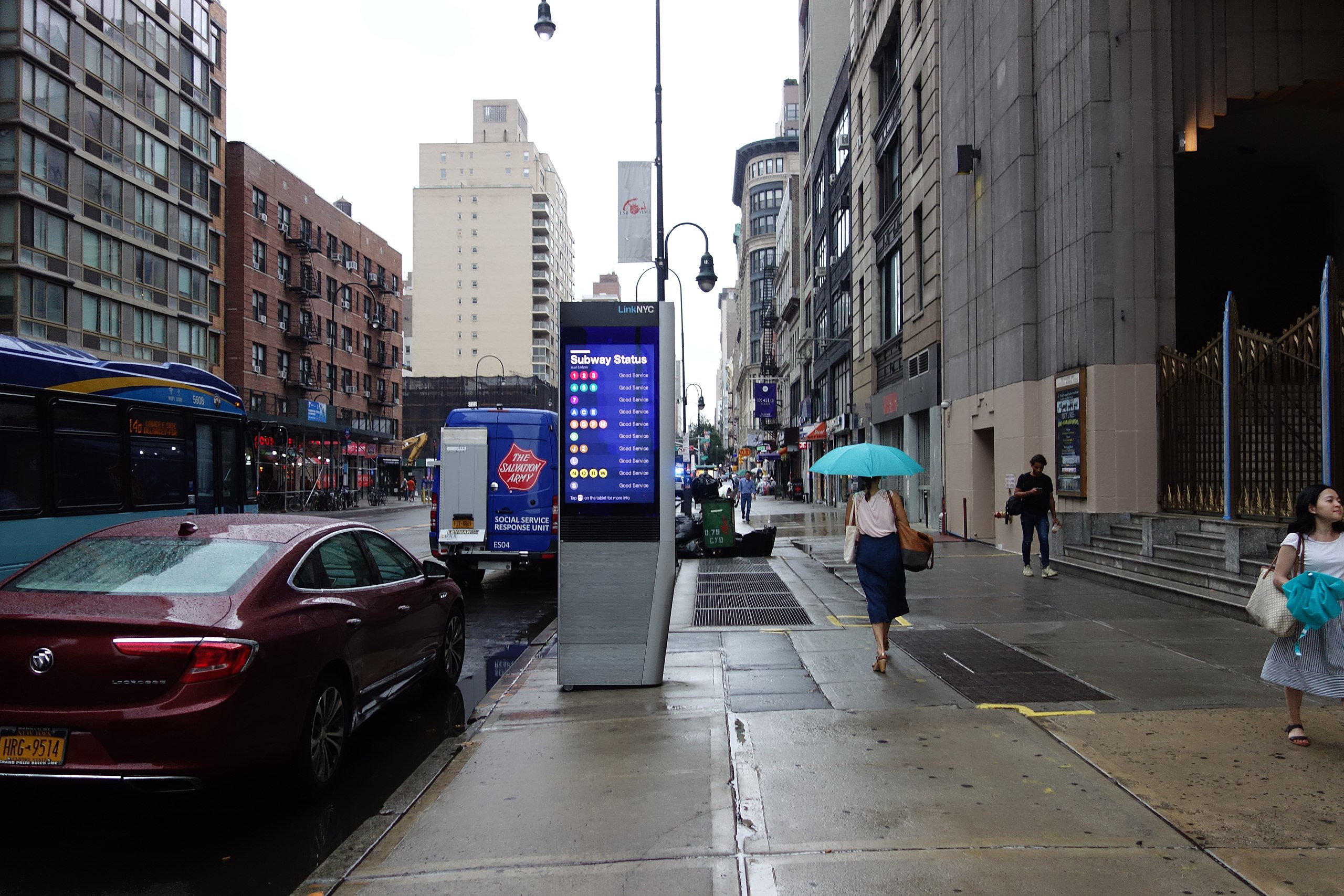 LinkNYC programme gets a reboot with 5G kiosks

The first Link5G kiosk was unveiled in the Bronx this month, with New York Mayor Eric Adams announcing a plan to roll out 2,000.

The announcement aims to reboot the LinkNYC programme which was launched in 2016 with CityBridge, a consortium that now includes Intersection and ZenFi Networks.

The kiosks provide free Wi-Fi, nationwide phone calls, and other digital services. The latest plan aims to roll the kiosks out more equitably with a focus on historically underserved areas, lay the groundwork for expanded 5G services, and be more financially sustainable than previous phases.

“The dawn of the Link5G era heralds a monumental evolutionary advance in our city’s LinkNYC programme and our broader, ongoing efforts to bridge the digital divide,” said Chief Technology Officer Matthew Fraser.

“As New York City continues its post-pandemic revival, Link5G’s ultra-fast network speed and expanded mobile coverage will go a long way toward clearing the technological barriers so many New Yorkers encountered over the past few years. In addition, Link5G’s equity-centred rollout has the potential to lift up entire neighbourhoods and communities that have languished as digital deserts amid this century’s rapid tech advances.”

Ninety percent of the new kiosks will be installed in the Bronx, Brooklyn, Queens, Staten Island, and above 96th Street in Manhattan.

During the public announcement, Robert Sokota, President, Wireless Division at CityBridge, said: “We can’t just do it in the commercial areas; we need to go to residential areas as well because the digital divide in New York City is biggest in the residential areas.

“That’s why we’re planning to ask the Public Design Commission for approval to deploy Link5G in residential areas so that we can bring more free Wi-Fi to the people who need internet access the most.”

When LinkNYC was first announced, it was to bring at least 7,500 and up to 10,000 Links to New York but this was later revised to 4,000 in an amended agreement. There are 1,871 active Links in place today, according to LinkNYC’s website.

Bumps in the road

Although LinkNYC is hailed as the largest free public Wi-Fi network in the US, the programme has faced some issues along the way.

After reports in 2016 of people using terminals to view online pornography, the web browsing feature is now limited to government and social services websites.

The new phase also aims to make the programme more financially sustainable. Previously, it relied solely on advertising revenue and did not grow throughout the outer boroughs. By 2019, LinkNYC faced bankruptcy.

In March 2020, the city said it was owed almost USD 75 million by CityBridge. According to the latest agreement, USD 25 million has been paid and a payment schedule has been agreed for the remainder owed.

“CityBridge is now current on its payments to the city,” Nick Colvin, CEO of CityBridge, told Cities Today.

The new mixed model includes advertising and 5G cellular services revenue – renting space on the poles to telecom companies to build out their existing 5G infrastructure.

However, the broader future of New York’s Internet Masterplan for universal broadband, which was announced in January 2020 under the previous De Blasio administration, is unclear. It included a USD 157 million capital investment commitment and making up to 100,000 city-owned assets available.

Reports last month said the programme was “under review” and focusing on “more near-term solutions” while the Internet Master Plan is being re-evaluated.

The city didn’t respond to requests for comment on this.

The devices have also raised concerns about privacy and “mission creep” in the past. LinkNYC’s website says it collects anonymised MAC addresses and it does not store browsing history or track the websites Wi-Fi users visit.

Fraser said: “Privacy is the cornerstone of this administration. That’s why part of the Office of Tech and Innovation is the Mayor’s Office of Information Privacy. We want to ensure that the public feel safe leveraging these devices and their information is only used in ways that’s acceptable.”

In response to a question about cameras, Fraser said the kiosks do have cameras which are not on constantly but can be activated.

Adams said the city already has police cameras in different places, but they could be cheaper to deploy via the kiosks.

“That’s a good idea to have cameras on here. I’m a big camera guy; I believe public safety is important…I’m going to take that idea and explore it,” Adams said.

Colvin said that since LinkNYC’s inception, there have been over 11 million users of its Wi-Fi network.

“While our privacy policies mean we do not know exactly how New Yorkers are using LinkNYC’s Wi-Fi, we do know it has been a lifeline for many of our neighbours. During COVID, 30 percent of free Wi-Fi users reported that they had no other means of accessing broadband,” he commented.

He added that since the start of 2020, over five million free phone calls have been made on Links, with the most dialled number being the Electronic Benefits Transfer hotline which disburses certain government benefits via a card.

“During the pandemic, tablet usage remained stable, and [they] were used to access government COVID support resources – including the IRS COVID relief programme – over 350,000 times,” said Colvin.

An inside look at mobile broadband standards development