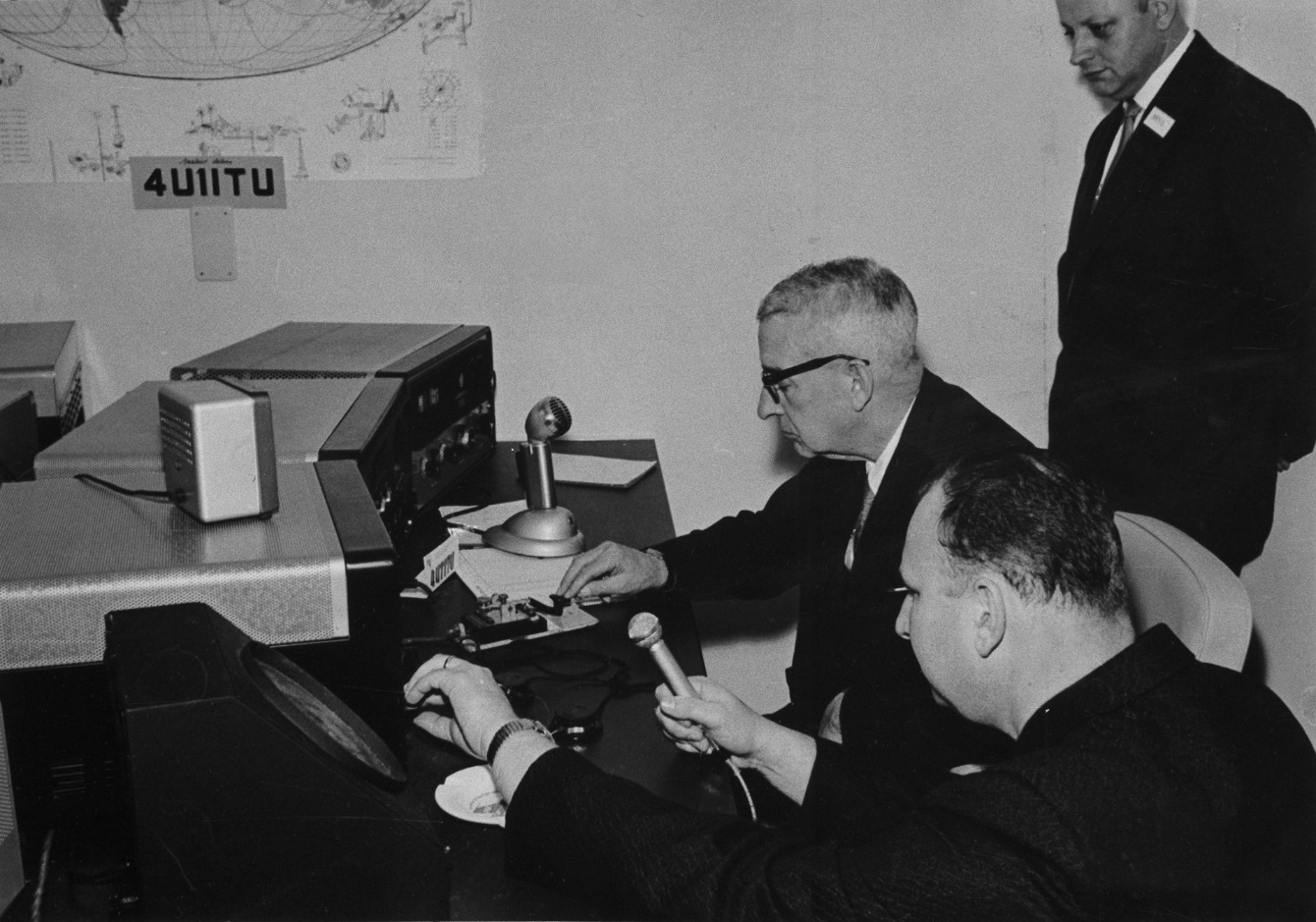 Did you know that the United Nations specialized agency for information and communication technologies owns and operates its very own radio station?

Residing at the headquarters of the International Telecommunications Union (ITU), the 60-year-old amateur station operates under the callsign 4U1ITU.

It started broadcasting on 10 June 1962 and was officially inaugurated the following month by then UN Secretary-General U Thant and ITU Secretary-General Gerald Gross – himself a ‘’ham” radio enthusiast known by the personal callsign W3GG.

Recognized as a unique “country” in the ham radio community, 4U1ITU operates in accordance with privileges extended by ITU and the Government of Switzerland. It has also earned the DXCC (or ham radio “century club”) award from the American Radio Relay League (ARRL), confirming air contacts with 100 or more countries.

From its long-time home on the 5th floor of the Varembé Building in Geneva’s international district, this unique broadcasting outlet still today serves as a model for the highest standards of amateur radio station operation everywhere.

From one to a million

4U1ITU’s first contact, or “QSO” in ham radio parlance, was made with a German station called DL4VK. Further QSOs followed, amounting to over 1,300 contacts worldwide in the first 24 hours.

In the six decades since, ITU’s radio station has made over a million contacts using Morse code carrier wave (CW), voice (SSB), and digital operational modes, based on more than 20,000 two-way QSOs with radio amateurs around the world.

4U1ITU can operate on most of the frequency bands allocated to amateur and amateur-satellite services as identified in Article 5 of the Radio Regulations.

Aside from letting licensed radio amateurs in ITU, its Member State representatives, and its conference and meeting delegates contact fellow radio hams, the station promotes international goodwill and cooperation across the community. It also allows hands-on demonstrations of amateur radio communications for delegates and meeting participants.

ITU’s ham outlet has been especially active during each successive World Radiocommunication Conference, the key decision-making body convened every four years for the ITU Radiocommunication Sector, when the station adopts the special callsign 4U1WRC.

On ITU’s 150th anniversary, the organization’s in-house amateur radio club organized an exhibition of ham gear and made a series of broadcasts from high-profile UN and telecommunication venues with the temporary callsign 4U150ITU.

Evolving with the times

Throughout its 60-year history, 4U1ITU has kept at the forefront of ham radio’s technological evolution. During the 1960s, the station saw the advent of accessible equipment for narrowband voice and single-sideband (SSB) communications, as well as orbit predictions and tracking for the first amateur radio satellites.

In the 1970s, the station engaged in some of the first very high and ultra-high frequency (VHF/UHF) contacts using “meteor scattering” of radio waves. Then, as personal computers proliferated in the 1980s and 1990s, 4U1ITU shifted to digital communications with one of the first bulletin board systems using AX.25 packet radio.

More recently, 4U1ITU has made several direct contacts with the International Space Station (ISS), linking ITU officials with astronauts from the US National Aeronautics and Space Administration (NASA) and the European Space Agency (ESA).

See the video recording of the event

Today, with the ITU’s Varembé Building slated for replacement, 4U1ITU is preparing for future broadcasts from a new ITU headquarters.

We hope the station endures for many decades to come, inspiring youth, helping unite radio enthusiasts worldwide, and strengthening ITU’s work to connect the remotest places on Earth.

How to become a radio ‘ham’ in the digital era

Celebrating the resilience of radio